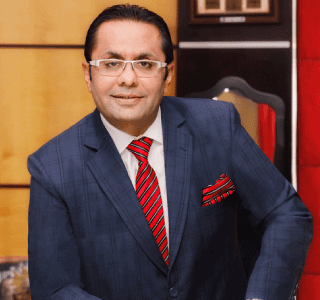 The evolution of Danube Group, one of the established building material firms in the Middle East, is directly linked to the journey of its Founder and Chairman, Rizwan Sajan. Born and brought up in a middle class family in Mumbai, India; Mr Sajan is a man with the ‘Midas Touch’. He has built his company into the undisputed market leader for building materials in the GCC and now slowly and steadily moving his foot prints towards property development and home improvement.

The company has recorded a turnover of 1.3billion USO dollars in 2018 and has been growing steadily ever since. Under Sajan’s guidance, over the last 25 years, the company has charted a path that transformed from being just one shop with one employee to global employee strength of over 3,300 people, over 50 locations in nine countries worldwide including UAE, Kuwait, Oman, Bahrain, Qatar, Africa and India. Danube Group occupies more than 5.5 million square feet of land in JAFZA making it one of the biggest land bank occupiers in JAFZA. The warehouses across the UAE stock more than 50,000 products.

Being a top ranking business icon, Rizwan Sajan has been a source of inspiration to millions. He says it his business strategy and the ability to think differently which has helped to build this empire. He creates his own USP rather than competing with others.

Ranked 7th among the ‘Top 100 Indian leaders in the UAE’ List by Forbes Middle East, Sajan’s story is made of a very simple lesson: A man’s grit and hard work can turn a small organization with humble beginnings to become a brand to reckon with. It was not just his experience but foresight, perspective and commitment that built Danube from a two-person team to a strong business empire with a global presence.

His mantra for success is very simple: find the right people, then trust and empowers them to run the business and this is exactly how he has steered his company to success. A workaholic by all means, Sajan has always believed that there are no shortcuts to success. Hard work and determination are the keys to his victory. During his leisure time he indulges himself in partying, travelling and watching movies with his wife, Sameera.

In recognition of Sajan’s leadership skills and abilities various awards have been conferred upon him, Such as:

Sajan has been an active panelist in discussions and thought leadership programs including the Indian Leaders Delegation to India, ICAI- Abu Dhabi Chapter, and an opinion leader in the SME Adviser Magazine.

In March 2018, Sajan forayed into another favourite area of his: Publishing. He re-launched the Filmfare Middle East magazine with a clear focus on films, fashion and lifestyle and in-depth exclusive interviews. This has, thereby, enabled the Hindi, south, Arabic and Pakistani cinemas to come under one roof. The glossy caters predominantly to the large Asian expatriate population in the UAE and the GCC, as well as a significant Arab population who love their Bollywood cinema and celebrities.

He also has an altruistic streak in him and believes in giving back to the society. In order to make substantial contributions to our society as well as to bring about a positive transformation in the lives of many workers in Dubai, Sajan started the Danube Welfare Center in November 2012

The centre offers a number of free training courses to help unskilled workers improve their language skills and further develop their careers. The initiative entails a three-month Basic English program that promotes workers to interact confidently. In the year 2016, over 1000 workers benefited from the program and at the end of 2017, the number had doubled.