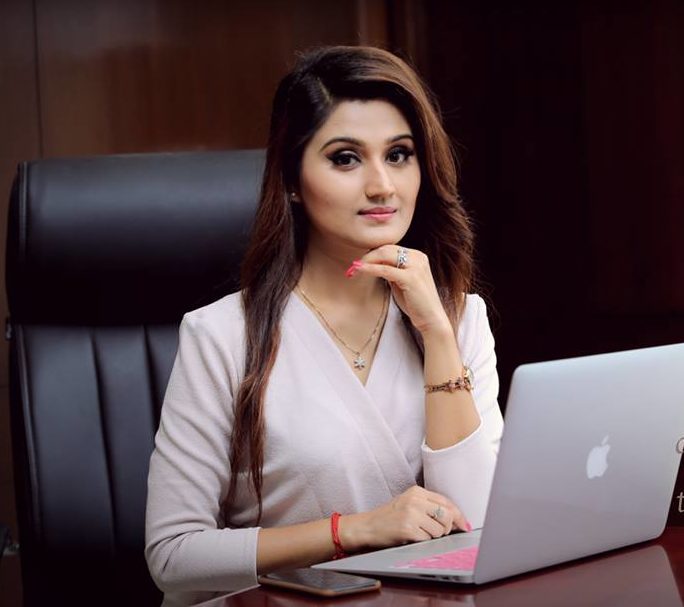 Arushi Pokhriyal is the Jury of Visionara Global MRS INDIA®

Arushi Pokhriyal is an internationally acclaimed Indian classical Kathak danseuse, entrepreneur, film producer and poet. She is the disciple of Pt. Birju Maharaj and Dr Poornima Pandey. She is a Kathak empanelled artist of Indian Council for Cultural Relations ICCR. She is also a graded artist for Doordarshan, a division of Prasar Bharati.

Arushi has been an active promoter for Namami Gange Mission which is project started by Govt. of India to clean river Ganga. Arushi has contributed her first ever Clean Ganga Initiative Kathak performance “Ganga Tujhe Salam” in Dubai, UAE in 2016. This was the world’s first International Clean Ganga Program held outside India to educate NRI’s about the importance of river Ganga and its cleanliness drive. In 2016 itself she has performed Ganga Avatran in Varanasi, Lucknow and Kanpur and won hearts of many audiences. Shri Uma Bharti (Minister of Water Resources, River Development and Ganga Rejuvenation) has appreciated Arushi’s efforts to educate people about importance of Ganga. Shrimati Sushma Swaraj (Minister of External Affairs) has also appreciated Arushi for her contribution to this noble cause.

She has been active in activities aimed at social reforms and programmes for the upliftment and empowerment of women globally. Recently she chaired IWEP (International Women Empowerment Program) in Dubai for which Arushi was featured in Forbes Middle East for her contribution to social work and women empowerment. Forbes applauded her IWEP International Women Programme about girl power stating Her influence has been phenomenal in the field. She is also active globally to promote “beti bachao beti padhao” a Government of India initiative to save Girl Child.

Arushi is also a poet. Two of her books on poetry collections, Swarg Banaungi and Kamal Mashal Ban Jaye, have been published in India. She has been fortunate enough to meet and present her books to Pratibha Patil, former President of India; Ratan Tata, founder of Tata Group; Anupam Kher, actor; and Mahendra Singh Dhoni, cricketer.

Arushi is married to Abhinav Pant. She is also the eldest daughter of Kusum Kanta Pokhriyal and Dr Ramesh Pokhriyal Nishank, Hon’ble Union Minister of HRD, Govt. of India.

Confidence in Your Life, Makes You Stand Tall on Your Own